Wander a short walk from the heart of Cork City and you might just happen across this fantastic gem and its wonderful avian denizens (I’m sure anyone who follows my photography page is driven demented by the sheer amount of photos of geese, swans and ducks as I have charted the growth of all this year’s hatchlings on the lough). The well-loved lough is a favourite spot for walkers and joggers, but I doubt many are aware of the fascinating legend that lies behind this natural spring fed pond. The earliest mention I could track down of this tale was circa 1825 when Thomas Crofton Croker was travelling around collecting tales and folklore. Chances are this legend might stretch back a little further, providing of course he didn’t make it up entirely after being inspired by seeing the lough. The story presents a number of motifs that are found in Irish literature dating back to the middle ages. I will briefly mention those at the end. First I will give a run down of the folktale.

Fadó, fadó (long ago) there was a great king called Corc whose fort was in the center of a valley where the lough now lies. Within the courtyard of this fort was a spring with the finest pure water to be found anywhere. People flocked from near and far to draw water from the well. This brought great concern to the king, as he feared his precious water would be all used up so he had a great wall constructed around it with a solid door, to which only he had a key. If he required water for himself, he would send his daughter to retrieve it for him.

One night, the king decided to have a great feast. Kings, princes and nobles from all the neighboring tuatha (petty kingdoms) were all in attendance and Corc personally selected the greatest filidh (poets) from near and far to regale his guests with praise poetry and to play their cruith (harp). Huge celebratory fires were lit, the tables were laden with the finest foods and everybody danced and drank. As the feast drew on, one of the lords in attendance rose to toast the king. “Sláinte (good health) to our great Rí (king). We do not want for the finest food or drink, but the one thing absent is some water”. You see, Corc had purposefully held this back in the hope someone would ask and he would be able to wow them with the well-renowned water that now lay hidden. “Water you shall have, and I challenge anyone present to find a finer source of water than this anywhere in the whole of Éireann (Ireland). “Daughter, fetch us some water le do thoil (please)”. The daughter, named Fíor Uisce (pure water, spring water) balked at being asked to do such a menial task in the presence of such illustrious company, so the king suggested that the fine prince that she had been dancing with all night go with her. Fíor Uisce and the prince delighted in this, so off they went. She retrieved the key and the prince carried the fine, heavy golden jug that Corc had specially made for this occasion and they made their way to the courtyard.

Upon opening the well-house door, Fíor Uisce leaned over the well to retrieve the water, but owing to the weight of the jug, she lost her balance and fell into the well. The prince tried his best to save her but the water burst forth from the well head with such force that he was forced to flee. The courtyard filled with such speed that by the time he made the relatively short journey back to the fort and spoke a single word to the king, he was up to his neck in water. The water continued to rise until the valley was full and it engulfed the fort, the outbuildings and the fine gardens  and hence, the present day lough was formed.

But that was not the end of it. For the king was not drowned, nor were any of the guests. Fíor Uisce, the fair daughter of the king was also alive and every night following this, up to present day, the celebrations still continue beneath the surface of the lough, and it is said that it will continue until someone happens across the fine golden chalice that lies hidden beneath the surface. It is believed that this happened as judgement for shutting off the pure water from the poor people who relied on it. It is also said that on days where the waters are clear, that you can still see the buildings clearly beneath the water. So next time you are there keep an eye out for the buildings beneath the surface and the tell-tale glint of the gold vessel!

So, with the tale out of the way, I will now touch upon some of the motifs present and any connection to history that I could find. A lot of the elements of this folktale can be found elsewhere in Irish literature. When looking for a real king, there was none by the name that I could link to a kingdom in Cork city, but there was a Corc (or Conall) mac Luigthig, who reigned in the 4th Century and is traditionally believed to have been the founder of the kingship of Cashel and the progenitor of many of the clans and septs of Munster. He was however said to have a son,  Ciar from whom the Ui Mhic Ceir, an unimportant sept on the south side of Cork City, arose (and the lough is situated on the south side).

The “flooded kingdom” type motif occurs in a number of places. The dindsheanchas (Lore of places) tales of the goddesses Sínann and Boand  (of which the Shannon and Boyne rivers are named respectively) tell of when they attempt to access otherworldly knowledge through a well, which subsequently gushes forth killing the goddesses. It is not unknown to find tales where buildings and communities still survive beneath the surface. There is even a very Christian version of this underwater world with otherworldly monasteries that are covered in far better detail in Professor John Carey’s article “Aerial Ships and Underwater Monasteries: The Evolution of a Monastic Marvel.

The golden chalice for collecting water brings to mind the tales that mention treasures hidden within otherworldly wells not to mention the archaeological record that shows votive deposits in bodies of water, and even at least one instance where ecclesiastical treasure was hidden within a holy well.

I hope you have enjoyed my recounting of this tale of one my favourite places. Should you want to read other versions of this tale, you can find the original version in Crofton Crokers “Irish Fairy Legends” or another version in Kate Corkery’s “Folk Tales of Cork”. 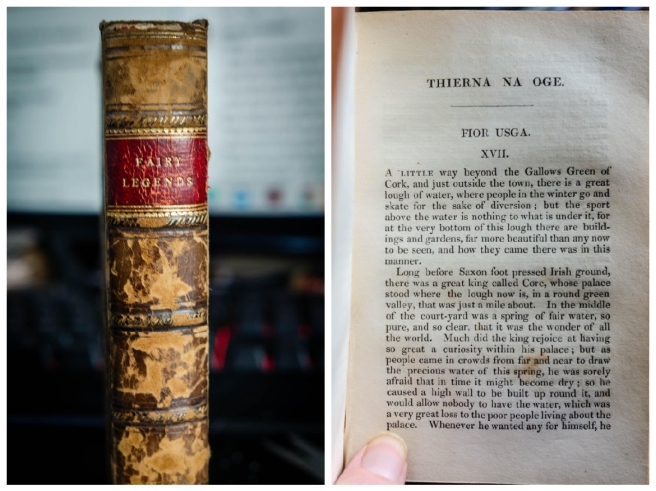