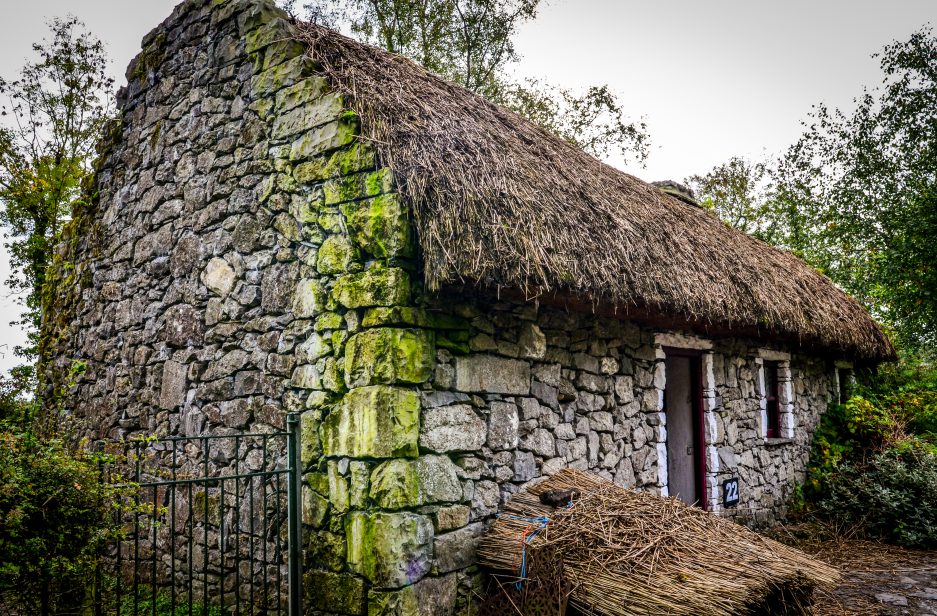 For today’s sojourn in the world of Irish folklore I would like to cover what are generally termed “fairy bushes”. These can also be known by a number of different names and you may also encounter them named as noble bush, gentle bush or gentry bush. The favoured name was often lone or lonely bush due to fact of their solitary growth and are often found left unmolested in the middle of cultivated farmland and treated with reverence and respect, regardless of how much of an inconvenience it is to the farmer.

They are also referred to by the Irish name for a thorn, Sceach or anglicised versions such as skeag,skeog, skea, skeagh or skagh. It was only well into the 20th century when some people no longer started to fear calling them by the name “Fairy Bush”, similar to the fear of calling the fairies themselves by name (they were always referred to as names such as “The other crowd”, “Na daoine usaile“, “Na daoine maithe”  or simply the Sídhe, among many others). Most often they are hawthorn but can sometimes be blackthorn, rowan, hollies or gnarled oaks can be associated with the supernatural.

Whitethorn (hawthorn) was considered a sacred tree. When it grows alone near the banks of stream, or on forts, it is considered  to be the haunt and peculiar abode of the fairies, and as such is not to be disturbed without risk, sooner or later, of personal danger to the person so offending,William Gregory Wood-Martin, Traces of the Elder Faiths in Ireland (1902).

They are often thought to be somewhat different in appearance to their more ordinary counterparts. The variation depends on where you are in the country: they may have more thorns than normal or no thorns at all, they may never blossom, may continue to grow after being uprooted or may be discernible due to their unusual formation (more gnarled or with elongated trunks, exposed roots etc).

Similar to the monuments known as ringforts ( alternatively named rath or lios,) these bushes are said to be the otherworldly abode of the other crowd. It is not uncommon to to find them growing on these ringforts. There are a number of references in early Irish sources to Bile rátha (Sacred tree of the fort) and these were possibly a common feature of these forts/ enclosed dwelling places. The bushes were also considered to be an assembly point or points were opposing factions of the sídhe would meet to fight. There have even been accounts of a strange green or white substance being found around these particular bushes, believed to be blood from these quarrelling fairies. One of the most famous of these being the latoon bush in County Clare. This made the news in 1999 when it was set to be destroyed when a new motorway was being built through the area. The bush is said to be a marker in a fairy path and was the rendezvous point for Kerry fairies on their way to do battle with the Connacht fairies. The respected folklorist, storyteller and fairy expert Eddie Lenihan made the news by sending dire warnings that misfortune would follow not only the people who would cut it down but that it would also pose a danger to any motorists driving over the spot. In the end effort was made to build around the sacred tree, thus preserving one more vital piece of our sacred landscape.

The fairies have a strong bond with their trees and there have been instances where they have been heard mourning, crying and wailing when their trees have been cut down. They have also been witnessed pulling cut branches out of carts or fires. Trees marked for destruction have been known to disappear over night. Strange animal sightings near the bushes are not uncommon either. Twigs or fallen branches are often left untouched where they have fallen out of fear and respect. Misfortune often befell anyone who attempted to cut down the trees and number of accounts of this nature are to be found on the National Folklore Schools Collection. Some excerpts from these can be read below:

“A man named Thomas Moorhead of Killakena went to cut a lone-bush or a fairy-bush, and with the first blow which he gave it with the axe, his nose began to bleed, and he got a pain in his head, and was confined to bed for three weeks afterwards”. (NFSC,Vol.0956:207).

“There is a fairy bush out on our hill and it is said that if you would dare break a leaf of it that something bad would happen you.

“In olden times it is said that (in olden times) a lot of fairies lived in under this bush and since that it got the name ,The Fairy Bush” (NFSC,Vol.1038:37).

People who transgress this taboo of interfering with these bushes may be met with a number of repercussions. The retaliation from the other crowd can range from thorns being left in your bed, waking up paralysed ,cuts becoming septic and requiring amputation, blinding being driven mad (many stories end with the transgressors ending up in a mental asylum) or even death.  People are very careful when cutting down bushes to make sure they are not inhabited. A stone is often placed under or near the bush and if it is gone come morning, the bush is left alone as it thought to be inhabited by the good folk or is believed to be on a fairy path.. Music, strange noises or lights coming from them are often recorded from them also. For anyone who wishes to delve deeper into the lore of fairy trees, the good news is there is no shortage of material for you to read up on. There are many folktales focusing on the subject and I would also recommend reading The Sacred Trees of Ireland by Christine Zucchelli and probably the best book out there on fairy encounters, Meeting the other crowd by Eddie lenihan or you can check out the National Folklore Schools Collection entries on the subject here.

The Sacred Trees of Ireland by Christine Zucchelli.

Meeting the other crowd by Eddie lenihan.

William Gregory Wood-Martin, Traces of the Elder Faiths in Ireland (1902)

6 thoughts on “The Fairy Bush”